A television commercial highlighting the benefits derived by homeowners in Haryana from the State Government’s decision to authorize the construction of a fourth floor in residential buildings. The move will go a long way in expanding the availability of affordable housing in Haryana. The film produced by Razzmatazz Films Private Limited, New Delhi, forms part of a public awareness campaign. 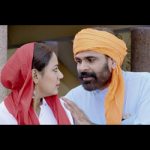